Glaucoma is best defined as death of the optic nerve head (ONH) or more technically, progressive optic neuropathy.  The optic nerve is the nerve that travels into the back of the eye and goes across the retinal surface.  The ONH allows the signals from the retina to be taken back to the brain.

There are many types of Glaucoma and are classified depending on whether the anterior chamber angle is open or closed.  Glaucoma can occur on it’s own (primary) or can occur as a result of another ocular or systemic condition (secondary).

To understand the different types of Glaucoma we must know the aqueous pathway.  Aqueous is a liquid that supports and provides nutrition for the eye (especially the lens and cornea).  Aqueous also forms the anterior chamber.

Aqueous is produced in the ciliary body behind the Iris.  This liquid then travels in the posterior chamber, through the pupil and then spreads out in the anterior chamber.  90% of this fluid then drains back into the circulation of the eye through the trabecular meshwork (which acts as a sieve/filter) and then the canal of schlemm (which is like a small drain).  The other 10% exits the eye via the venous circulation of the ciliary body, choroid and sclera.  A tiny amount also drains through the Iris. 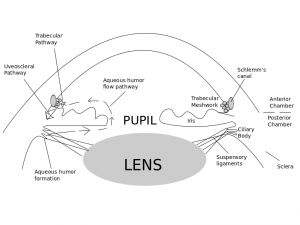 This normally occurs when there is a dysfunction of the trabecular meshwork.

Typically in the UK, referral is based upon 3 assessments/findings

You can use contact (applanation) or non contact (non applanation) technique.  Applanation is considered to be the most accurate.  Methods include Goldman (gold standard) or Icare (also very good).  There are other methods such as the tonopen.

Guidelines are as follows:

For patients with ocular hypertension or suspected glaucoma a reliable baseline measure of intraocular pressure is required. A minimum of two intraocular pressure readings on a single occasion using the same tonometer is recommended. The type of tonometer and the time of measurement should be specified in any referral to secondary-eye-care services. (sign guidelines March 2015)

When examining the ONH try and be systematic,  The above list is the order in which I examine and assess the ONH.

It is possible to measure the ONH size using the slit lamp and a condensing (volk) lens. The slit beam height can be adjusted  when viewing the fundus through a volk lens. A graticule gives the size in mm. An adjustment must then be made depending on which volk lens was used.

The disc height is becoming increasingly important as recent guidelines have recommended that we measure the size of the optic disc and the ratio of the narrowest rim/disc be assessed. The guidelines for referral to secondary eye care services are presented below:

Cup to disc ratio is important as a large cup can be a sign of Glaucoma.  However, many normal eyes have large cups (physiological cupping) and careful examination and consideration of all findings need to be done prior to referral.

Para-papillary chorioretinal atrophy (PPA) consists of irregularities of the retinal tissues surrounding some or all of the disc margin. The underlying choroid is completely intact, and therefore PPA differs from myopic scleral crescents or tilted disc scleral crescents.  It is very common and present in almost all normal eyes.  There are two distinct sub-types;

PPA can be a sign of damage to the ONH.  Normally, when there are larger zones of both alpha and beta PPA with beta PPA being present more frequently.  There is also evidence to suggest that the area with greatest PPA correlates to the area of glaucomatous ONH damage. Change in PPA does not appear to occur in non-glaucomatous optic neuropathies.

The neuroretinal rim (NRR) is the nerve tissue between the disc margin and the outer edge of the cup.  When there is damage to the ONH, initial changes may be to the NRR. We commonly assess the rim using the ISNT rule.  This is where the inferior rim is thickest, superior next thickest, nasal next thickest and temporal thinnest.  If this rule is broken, the optic nerve may be suspicious. As previously mentioned, new guidelines have mentioned that both the NRR and rim/disc ratio need to be considered.

These are normally seen a little later but include:

The lamina cribosa is visible when the disc is deep.  Look for changes in the pores of the lamina cribosa.  If they are round, they are normal, slightly oval may indicate changes and slit like is suspicious.

The retinal nerve fibre layer (RNFL) is a layer of striations (fibre bundles) that run from the optic nerve towards the periphery.  The striations look like silver/white threads and are best viewed with a bright, red-free light (green filter). It is easier to see in eyes with heavily pigmented retinal pigment epithelium (RPE) and choroid and may be very hard to see in eyes with blonde fundii. The RNFL is most visible within 2 disc diameters (DD) of the ONH and is brightest infero and supero-temporally, where the fibre bundles are most dense.  Age and media opacities also make it harder to see.

We need to look for changes in this RNFL.  The changes can be focal, localized or diffuse. If clearly seen, it can be a significant sign of glaucomatous optic nerve head changes.  If a correlation is made with a visual field defect it is even more valuable. 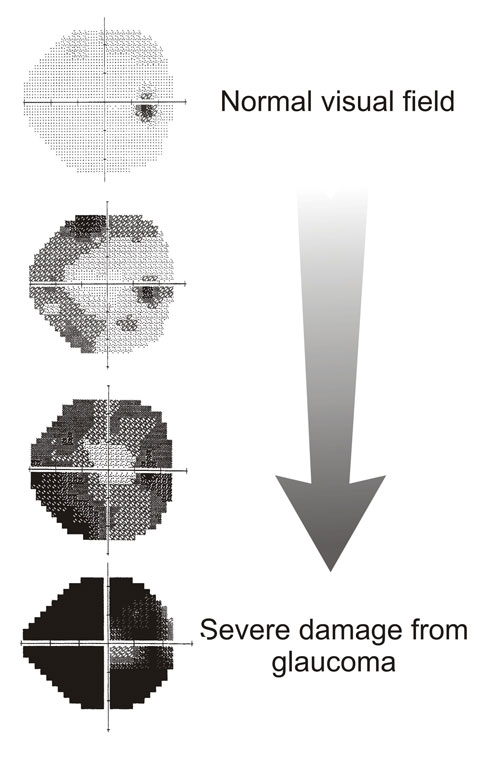 NOTE: A detailed article on visual field defects will follow

To measure the corneal thickness, an instrument called a Pachymeter is used.  This device uses ultrasound to measure how thick the cornea is.  Patients who have thinner than average corneas have artificially lower IOP readings and patients who have thicker corneas have artificially higher IOP readings.  It is important to check this and adjust IOP readings accordingly.  There is some evidence that suggests patients with thin corneas may increase their chances of having Glaucoma.

It’s worth mentioning that there are many sub groups of CAG.

These include intermittent (or subacute), acute, post-congestive and chronic angle closure.

In depth detail of these subsections are outwith the scope of this article.

Selective Laser Therapy – A YAG laser is used to selectively laser pigmented TM cells without inducing photocoagulation and collateral damage to non-pigmented cells, This is achievable due to the shorter pulse duration (3 nsec) than the thermal relaxation time of melanin (1msec). There is a high success rate in lowering the IOP with this technique as is often the first choice therapy in POAG these days to prevent a lifetime use of drops

Iridotomy- an argon laser is used to make a hole in the iris.  This allows the pressure to stabilize, enabling the iris and ciliary body to lie back down normally

This is not always dependent on IOP.  Normally we are advised to refer if 2 out of the 3 possible findings explained about are out with normal.

Note – Patients who have ocular hypertension with intraocular pressure <26 mm Hg and central corneal thickness ≥555 micrometers may be monitored in the community. 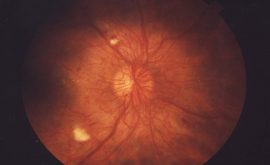 Diabetic retinopathy is a term used to describe retinal damage that results from diabetes. The …
April 28, 2016
Read More 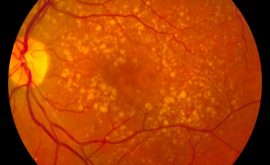 Age related macular degeneration (ARMD) is the definition for  damage caused at the macular.  The …
May 25, 2016
Read More 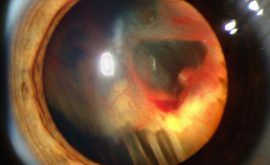 A retinal detachment is defined as the separation of the sensory retina from the retinal …
July 3, 2016
Read More 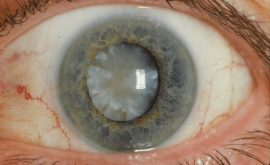 A cataract is simply defined as a haze or clouding of the natural crystalline …
November 4, 2015
Read More